The Origins of Derpy Hooves Derpy Hooves was named on October 25th, 2010, by the members of /co/ on 4chan. She would be the first background character named and given a personality, a trend starter which other background ponies like Carrot Top, Bonbon, and Lyra would follow. When Vinyl Scratch came around, many would accuse people of going to far, as DJ Pon3 only had a three-second moment on the show. Many would point back that when Derpy came to be, she also only had about three seconds on the screen. It was be a member of the /co/ threads that discovered her, though people had noticed her before. While watching Episode 1 on Youtube, Dr. Foreigner would take notice of a derpy-eyed pegasus at Twilight’s welcoming party. He then pointed this out to the members of /co/, and in a passing comment named her. (see also Header Image).

In my dreams, I fly.

There’s no ground, no trees, no serious cloud cover…just thermals, breezes, gales, and all the different weather I could ever want to play around in. No jobs to do, no appointments to meet, no chance that if I close my eyes I’ll accidentally run into something. Just endless sky, and my wings to carry me through it.

As sun peeks through my curtains, I drift awake, bit by bit. A comfortable-looking bank of clouds invites, and I settle in it, before rubbing back against it and letting my eyes slide open.

It’s only just after sunrise, so I can appreciate the splashes of yellow and orange, the swiftly-shortening shadows, and not resent the sun too much for beginning to dissolve my cloud-room into morning mist. With a yawn, I rise to all fours, fold my blanket, and tuck it into my saddlebag, one of two. The other is for business only.

As the comforting cool of my quick shelter dissolves, I head for the post office, backwinging slowly to a stop. The comforting smell of coffee and hot chocolate wafts from within, and I trot in with a smile.

“Morning, Bright Eyes.” Stamp’s already there; sorting the modest piles of mail headed in and out of Ponyville. He’s probably been up for hours; his dedication to the mail is admirable. “Coffee’s on. Mixed a little cocoa into it for you.”

I nod, and trot evenly over to the counter, smiling at the straw. Stamp has finished piling the letters, and only now does he join me, taking his coffee with a single lump of sugar.

As I drink, he details the mail.

“Nothing particularly difficult. Cinnimane has a package; there’s a catalog for the Cakes, and a directory of cloth swatches for Rarity. The rest is all regular mail.”

As I finish my drink, he tucks the mail into my saddlebags, balancing both sides to ensure I fly straight. Once both are buckled down, I gallop out the door and into the sky.

It’s easiest to start from the farthest outskirts of town and work my way in. If there’s new mail, it’s ready as soon as I get back, and I don’t need to backtrack.

The first stop, therefore, is Applejack and Big MacIntosh’s farm. Two letters, one of them regarding new varietals of apple, go on their doorstep, before I’m in the air again.

For the next hour, I hop from doorstep to doorstep, leaving mail in my wake. Rarity is there in person to accept the cloth swatches, tail still in its curler, and is at once delighted with new materiel, and furious at having been seen at all below perfect. I assure her I won’t tell anyone, and she is mollified.

At the Bakery, Mrs. Cake offers me a fresh macaroon, which I accept gratefully. Apparently Pinkie Pie is still asleep, which is something of a relief. A few doors down, Cinnimane’s package is left on her doorstep-apparently not a morning pony.

A brief hour after I left, I return to the Post Office. During Episode 4, Applebuck Season, she would be a part of the group that eats Applejack’s “baked bads,” and is assumed to be the pony who says “muffins,” which is how it became her favorite food.

Sometime in late November, a person by the name of Shon Howell would send a personal message to Lauren Faust via Deviant Art, asking if this background character had a name and what her cutie mark represented.

From ShonHowell – First off, let me say just how much I’ve been enjoying My Little Pony, Friendship is Magic. It’s clever, well conceived and EXTREMELY well written. But I was wondering if you could clarify something for me. You may or may not be aware that MLP FiM has a growing fanbase (helped along by YouTube), and fans being the way they are jump on some points of production and running wild with it. In the first episode, there is a grey pegasus with a blonde mane at Pinkie Pie’s party with loopy eyes. Fans have dubbed her “Derpy Hooves” and she’s blowing up. I’m coming to this party a little late, but I was curious as to whether or not this pony had a name or not and what her cutie-mark represented. Thanks for any help you can give in this and keep up the good work.

From Fyre-Flye (Lauren Faust) – Ha! I lurk around a bit and I noticed the Derpy phenomenon. As far as I know, her wall eyed moment was an accident — or perhaps a layout artist entertaining him/herself. Who knows? Background ponies have no name, and their butt symbols are picked at random, so she can be Derpy if everyone likes. A later episode references a less-than-intelligent local pegasus named “Ditzy Doo” so maybe she can be her if we ever need to show her. But I would not want to step on everyone’s Derpy love. This would be the origins of the name Ditzy Doo, which man fans have taken as her real name. Some people have combined the two, Ditzy “Derpy” Doo Hooves. Some claim that Derpy is a hateful remark used by other ponies to make fun of her disability, while others just view it as a nickname.

The episode which Ms. Faust spoke about was Winter Wrap Up, where it is mentioned that Ditzy Doo went north to fetch the southern birds. There has been confusion due to the pony shown with the birds, as it is a Derpy clone (one of several that showed up during the episodes), and many have assumed despite the wrong colored hair, that this was Derpy. There is no proof of whether it was or not. Then again Ms. Faust also said it didn’t have to be, as to not step on everyone’s love for Derpy. She would also become a mother after Episode 12, Call of the Cutie, when people started to associate a purple-colored, blonde-haired filly with her. This filly would become Dinky Hooves. Her fandom was created around the fact that Derpy is seen in the party, and she resembles (in at least hair color) Derpy herself. Fans would more or less just take off with this idea, creating a mother figure out of Derpy. Her fame would rise during Episode 15, Feeling Pinkie Keen, when she would suddenly appear on screen, with her derp eyes. Many had guessed she had also been placed as the pony who dropped the piano on Twilight, but through questions on Faust’s DeviantArt page we learned that she had always been the one, and that it was the producers who went back into the episode and changed her eyes. From this point on in the season, anytime she appeared, she made her derpy eyes. As of Season 2, she is now a little more than a background character. She was now part of the storyboard process and would appear in each episode, still as a background character but now getting more specific scenes. So far (at the time of this article) she has been seen fighting with Mayor Mare, and during the most recent episode (Luna Eclipsed) pulling the plug on the apple bin.

One of the more enduring features of Derpy is she isn’t overly locked into a personality as many of the other background ponies are. Fans project what they want from her, be it a drooling moron who is incapable of saying nothing more than muffins or even unable to speak in coherent sentences, to just a mail pony with a vision problem. It doesn’t matter what you call her, Derpy Hooves, Bubbles, Stoneface, Ditzy Doo, she will always hold a very special place in this fandom.

As of Season 2, Episode 14, The Last Roundup, Derpy has been officially named by Studio B, and even given a voice (done by Tabitha St. Germain). This scene appears in the first portion of the episode, directly after the intro. Rainbow Dash is decorating Ponyville Town Hall for Applejack’s party, when the tip of her tail is struck by lightning. She proceeds to say “Now be careful, Derpy” and proceeds to point out the extra damage done to the town hall. The scene pans over to show Derpy jumping on a thunder cloud while she proclaims “I just don’t know what went wrong” and subsequently gets struck by lightning.

The color of Derpy (and even Dinky) was an old argument in the early days of the fandom, namely due to color issues with downloadable episodes and the severe lack of HD rips. She ranged from a darker grey to an almost purple color, which is why you may come across old fanart where she is either a dark grey or has a purple hue. This image was supposedly created by an animator for the show, posted on /co/, and was about the argument of Derpy’s color. (One of my classic favs). 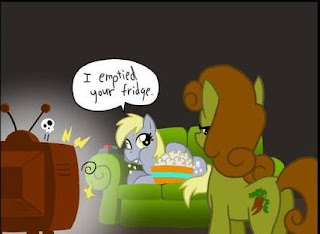 I emptied your fridge: Is a meme created from a storybook comic written by Elosande, which tells the story of Derpy getting injured while delivering a package, and Carrot Top (at the time dubbed Carrot Cake) delivering the package for her through the Everfree Forest, where she encounters many things. Above is the final panel which started the meme.

The original pencil sketches that Elosande posted on /co/ can be found here on EqD (side fact: EqD was about 3 days old when this was posted). A person by the name of Ace created the colored version that most people have come to know.