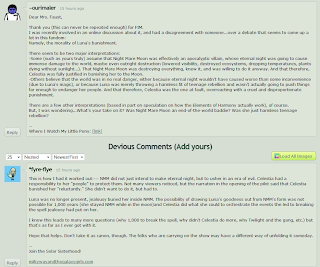 A fan by the name of Ourimaler asked Lauren Faust a question about morality of Luna’s banishment, as it seems to be a topic of debate in some circles of the community.  Some interpretations include the possibility of Luna being an apocalyptic villian, since eternal darkness would kill plant life and so forth, while others assume that there would be no danger, due to magical intervention and such.
Below is the text version of what Ms. Faust said in reply to Ourimaler.
This is how I had it worked out – NNM did not just intend to make enternal night, but to usher in an era of evil.  Celestia had a responsibility to her “people” to protect them.  Not many viewers noticed, but the narration in the opening of the pilot said that Celestia banished her “reluctantly”.  She didn’t want to do it, but had to.
Luna was no longer present, jealousy buried her inside NNM.  The possibility of drawing Luna’s goodness out from NNM’s form was not possible for 1,000 years (she stayed NMM while in the moon) and Celestia did what she could to orchestrate the events that led to breaking the spell jealousy had put on her.
I know this leads to many more questions (why 1,000 to break the spell, why didn’t Celestia do more, why Twilight and the gang, etc) but that’s as far as I ever got with it.
Hope that helps.  Don’t take it as canon, though.  The folks who carrying on the show may have a different way of unfolding it someday.
– L. Faust
Tags: news
← Comic: Resident Ponyville Discord by MadMax
S2E7 Screenshot Preview →