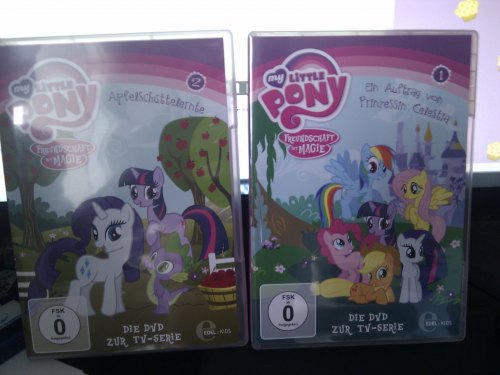 “You need to stop, reading these old dusty books… Find new friends!” That’s what Princess Celestia told Twilight Sparkle. Even though she is he smartest unicorn in Equestria, her grade in Friendship is an F. There is more to a young pony’s life than studying. So Twilight Sparkle is on her way to Ponyville to meet five very unique ponies: Pinkie Pie, Rainbow Dash, Rarity, Fluttershy, and Applejack.

The blurbs on the freshly released My Little Pony DVDs and CDs just summarize vaguely the plot of the pilot episode. However this can’t stop an interested viewer from putting the disc in his DVD or CD player. While every DVD contains three episodes in chronological order, the CDs were cut to two. Let us start with the audio play. Like most audio plays for cartoon series, dialogs from the show were directly copied onto the CD, accompanied by a narrator. Due to this narrator, you can enjoy the episodes in a very new way. Why, you ask? Some child audio play narrators have the habit to be sarcastic in some situations and sometimes “argue” with the characters in the story. Here, the narrator likes to make fun out of Rainbow Dash and also Spike (e.g., “magisches Briefkastenmaul” (magicial mailbox maw)). Nevertheless, the quality of the audio is a lot better than the TV version and on top of that, the songs made by Daniel Ingram got hugely improved in terms of sound quality. Sadly, only two episodes are on each disc, despite the fact that only half of the CD was used.

The DVDs are a different matter. Filled with three episodes and no extras, the average price of about €8 is too much for some. Also, due to license issues, only the German dub is on the disc. However, the picture and audio quality is better than the TV version but looks gray-washed compared to the iTunes version. The audio desync of the TV version was fixed, and it is interesting that EDEL used the original text display and not the German one. Furthermore, the DVD presents the show in 5.1 Dolby Digital sound and 576p 16:9. To sum up: The DVD is not perfect, like other ones for children. But if EDEL can fix the dubbing license issue, add extras like behind-the-scenes or the extended opening, the German DVDs should be the choice for everypony—especially since they are regio free.

I know some of you hate the German dub, and weirdly enough most of you are German, since other European viewers are envious of our localization quality. Remember that Hasbro went in our direction with the DVD and even re-synched some parts of the show to make them fit the older audience. So leave your high horse and enjoy some little pony fun. The audio play is something you can always enjoy, thanks to the narrator; the DVD is in its current state arguable, I must confess, but like in every economy, requests can change company decisions. If you want to support the show, buy it, if you want to experience the dub first before doing so, watch it legally on nick.de.

And now for those who want a final score: