And so with the passing on Monday, the fandom celebrated its first year.  I wasn’t quite sure which day was going to be celebrated, but the story of October 19th is probably lost now with so many new and recent fans that make up this community.  If you don’t know the story, then that is my own submission for Submission Tuesday.

#1 The article that is claimed to have started it all…

I joined the fandom around November via the MLPGs of /co/, so I was around a lot of the original people who kind of gave this fandom a kick start.  Of course people were already gathering on random sites, but the first explosion of the fandom would come from 4chan’s /co/ threads.

I don’t know the actual story, just was always told this article by Cartoon Brew writer AMID was what caused a group on /co/ to watch My Little Pony.  Basically it perked the ears of several due to names like Lauren Faust and Rob Renzetti being attached.  Faust of course known for her work on shows and movies (Fosters, PPG, Cats Can’t Dance, Iron Giant) and Renzetti (2 Stupid Dogs, Dexter’s Lab, PPG, Samurai Jack).  And I’m sure like most people in that era, it was the classic “I dare you watch this and say its not actually good”.

Correct me if I’m wrong, I may write a book about this whole thing someday, and get me some of that spendy cash monies.  Anyways, on with Submission Tuesdays.

http://www.poniesismypassion.com/
#2 Ponies is my Passion
Was submitted several times to us (once by a random vistor and then by the site owners).  The random visitor described the site as a pony version of FML & MLIA (….no clue what those are).  Silverbell, Sun Shower and Goldmane describe it as a site of personal anecdotes from fan’s daily lives, from funny exchanges with friends to heatwarming family moments to trivial thoughts shaped by ponies.  Its community driven and more traffic would be welcomed. 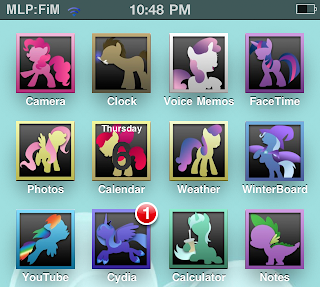 #3 iDevice Theme
This was already seen on the EqD but its creator submitted it to us also.  But if you didn’t hear about it, there is now a pony theme for iDevices, if not mistaken there’s another one that was also released.  The above is made by Cameron, made for the iPod Touch but also works with iPhones and iPads.  To see your theme, go to Cydia app, search MLP theme and pick the first choice you see.  Download using Winterboard, and if you don’t have BigBossRepo Source, you’ll need that but apparently its standard on most devices.
So…I guess good luck iDevice users, sorry I’m a droid user, and we got very little app wise (a few soundboards, etc).
#4 Doctor Whoof Radio Play: Partners in Crime
Squeak submitted the next Doctor Whooves radio play, I do believe we featured the other ones in the previous Submission Tuesday, and of course showcased the storybook recently done. 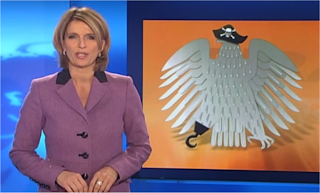 #5 Accidental Brony Shoutout in German National Television
So this was submitted to us with details, since the page linked above (click the image) is all in German.  In short there was some sort of brony shoutout done, not sure if by the political party that this video is from or what (crap internet, can’t watch), but check about 1:28 into the video, tell me what you see.

Apparently the “Pirate Party” is a real political party on Germany and other Euro countries, made up of nerds, geeks and pretty much everyone else who has an affiliation with the internet.  Apparently the video expires in a few days, so grab me some screen shots.

Tags: community, entertainment
← “everybody is my wife” – What Japan thinks about MLP:FiM
Crochet Ponies bu CrochetIsMagic →