By DerpySquad October 20, 2011, 6:55 am UTC My Little Pony Comments Off on Submission Tuesdays #7 (Now with more Thursday flavor)

by ~Coyote-Ulki
Time for our Submission Tuesday, now with more Thursday.  It also turns your milk into poison.  Halloween is upon us, and if you happen to carve Derpy into a pumpkin (or well any pony) feel free to send it in.  Anyways, since we’re two days late with this post, lets get to it. 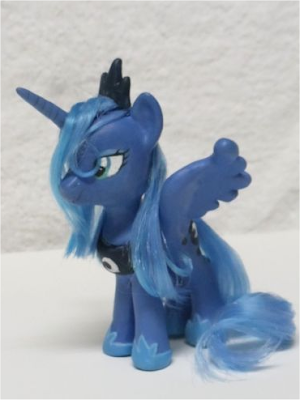 #1 Custom Luna Figure by ModernWarMare
You can find this little gem on eBay, created by ModernWarMare and will be “one of a kind”, as MW isn’t going to make another one.  Made in honor of the upcoming Luna Eclipse episode.
[eBay: Custom Luna] by ~dusty2910
#2 Custom Derpy Sculpture by Dusty29100
I think someone in our staff linked this when it first came out (also seen on EqD).  Custom Derpy sculpture by Dusty29100 (who is also open to commissions).
#3 Mine Little Pony (Video)
Submitted by Fred Fred Pony, Minecraft version of the show intro.  Ponies are kind of creepy as block people.
#4 Derpy Voice Competition for Definitely Accidental (Machinima.com)
The creator of Definitely Accidental is looking for a voice actor to put in their shows.  We are told that Derpy appears somewhere in them for a short skit.  Of course right now comments are being spammed for BaldDumboRat.
#4 No Fear Song (Giggle at the Ghosties) in Russian
Submitted by Nickro, Pinkie’s No Fear song done in Russian, one of my favorite languages (#2 is german).
#5 Real Life Sonic Rainboom
People playing around with effects, gotta work on how RD moves, just doesn’t look right.
Tags: community, entertainment
← Year of the Pony
BREAKING: picture from the next episode! (updated) →