Whinny City Ponycon is back in 2018 with the theme of Old Chicago. Below is the official tease:

From the organizers of Ponyville Ciderfest, Aquatifur, and Anime Milwaukee, Whinny City Pony Con is back for our third year! Chicagoland’s biggest My Little Pony: Friendship is Magic fan convention returns to the wonderful Hyatt Regency in Schaumburg, IL on April 13th – 15th, 2018!

Our theme for 2018 is “Old Chicago”, celebrating the best of the Roaring 20’s and Dirty 30’s. From Flappers and Jazz to Gangsters and Swing Dance, our event list this year will have plenty of new and fun attractions! We look forward to once again bringing the excitement of MLP:FIM and its fandom to Chicagoland for a fun filled weekend of ponies, friends, fun and entertainment!

The Hyatt Regency Schaumburg is near both I-290 and I-90 (Northwest of Downtown Chicago and O’Hare Airport) and across from Woodfield Mall.

Registration for all badges, applications for panel and community guests, and hotel reservations at $109.00/night are all open now. It may not be Equestria, but the world has some amazing wildlife. But it’s in trouble. Every year, thousands of endangered animals are killed for that one thing that makes them an amazing and unique creature in the animal kingdom. Elephants, tigers, sea turtles and other threatened species are being illegally harvested at alarming rates, driving these creatures to extinction. The illegal wildlife trade is a $10 Billion industry that laws, and enforcement on an international level have been unable to stem. What creates the demand for these animals? Normal, everyday people like you around the world. One organization, WildAid, has set its mission to ending the illegal wildlife trade through public awareness campaigns and comprehensive marine protection. It’s goal is to convince the people of the world that ivory jewelry, shark fin soup, and other such illegal wildlife commodities, are not worth the price being paid. These are not animals to be seen in the zoo, but in the plains, jungles and oceans of our world. It all would make a certain yellow pegasus cry and no brony wants that.

Animals of the world need help and we here at the MLP Fanbook Project, are hoping bronies can help us lend a hoof. We are creating a printed book for bronies, by bronies, and will contain within its pages art from different artists throughout the fandom! The book’s theme is “Friendship is WILD,” with My Little Pony art themed around the wild and endangered animals of our world. Once printed, the book will go on sale and 100% of the profits made off each book will go directly to WildAid.

But we need the fandom’s amazing artists to help by contributing their talent and art! If you’re an artist please send an email to [email protected] with some examples of your work or if you’d like more information. The more people, the better. Any artist involved will retain all rights to their work and can use their art for whatever they like after the book is released. If you aren’t an artist you can still help by sharing this project with others.

We look forward to hearing from everyone interested and remember, only people can undo the harm other people have created!

Bring on the Beat! Musicians Rock the Stage at BABSCon’s NEIGHhem

February 3, 2015, 7:37 pm EDT My Little Pony Comments Off on Bring on the Beat! Musicians Rock the Stage at BABSCon’s NEIGHhem A note. It resonates through the midnight air in a carefully crafted composition. You find it hard to resist. The dancefloor beckons. Then a rhythm, erupting from the stage, pulsing straight to the center of your brain. “What is this feeling?” You can’t contain yourself. You rip yourself from your stupor and groove towards the center of the floor. Let your moves rain down. This is it. This is your night.

We have more bass-dropping talent than you can shake a drumstick at…hours of non-stop, adrenaline-pumping beats for two whole nights of electric euphoria. Friday and Saturday nights, BABSCon’s NEIGHhem Festival boasts unique and well-known musicians for two nights of wonder and excitement. Headliners include the amazing Eurobeat Brony and the wickedly talented, P1k. Bring your lights, your threads, and your dancing A-game for the biggest concert in BABSCon history.

We’re not messing around this year. NEIGHhem features performances by the best of the best in music and mixing. With out further adieu, BABSCon is pleased to announce our first wave of musicians:

Rock the beat at BABSCon this year with your favorite artists! April is closing in soon, be sure to register for BABSCon, and check out more about our featured NEIGHhem Artists on our website.

The Bay Area Brony Spectacular (BABSCon) is the first convention devoted to My Little Pony: Friendship is Magic in the San Francisco Bay Area. In our first year, we became the second-largest MLP con anywhere, and we’re back for our second year April 3–5, 2015 at the SFO Hyatt Regency in Burlingame, CA. Contact [email protected] for more information!
babscon.com • facebook.com/babsconsf • twitter.com/babsconsf • babsconsf.tumblr.com Friends, life isn’t all about My Little Pony: Friendship is Magic.

OK, so maybe it is for some of you—and it’s certainly our main focus here at TrotCon, too. But one of our two new guests at TrotCon 2015 has quite the impressive resume outside of ponies, so much so that we simply couldn’t resist having him out.

In 2015, we’ll be having Brian Drummond, a man of many voices, at TrotCon!

You may best know Brian for his work as Vegeta in the Ocean Studios English dub of Dragon Ball Z, along with tons of other prominent anime roles, including Ryuk in Death Note, Renkotsu in InuYasha and Zechs Merquise in Gundam Wing. For real, dude gets around.

But that’s not all! Brian has lent his voice to quite the rundown of characters in MLP:FiM, most prominent among them Carrot Cake (or Mr. Cake, if you will) and Filthy Rich, along with a score of other roles like Ahuizotl and even Dr. Hooves in an early episode. He also threw it down as Spike in pre-FiM content The Princess Promenade, Crystal Princess: The Runaway Rainbow and My Little Pony Live: The World’s Biggest Tea Party. Where you at, G3 fans?!

As for our other guest? Let’s keep it in the family, shall we?

We’ll also be bringing Brynna Drummond to TrotCon 2015! You’ll know her as lil ol’ Babs Seed from the Apple family, the fourth member of the Cutie Mark Crusaders. Get ready to sing the song. The “Babs Seed” song. It’s gonna happen.

Fancy a visit with the Drummonds? Come on down to TrotCon 2015, held July 17–19 at the Crowne Plaza Columbus North. Badges are currently $45 for the whole weekend—and guess what? We’re not done announcing guests. No, sir/madam.

Midwest Brony Fest is honored to announce that PonyvilleFM, the number one fandom station for electronic music and live DJs is a proud supporter of Midwest Brony Fest 2015.
Their continued support over the last four years of fandom art, music, and general creativity has proved to be of much value to our community. We couldn’t be happier to have their support for MWBF15.

Along with supporting our convention, including the fandom’s premiere concert, LOUDER, they are offering 10% off any tier registration along with a sandstone figure of their adorable mascot Aerial Soundwaves, the only DJ pony to rival Vinyl Scratch in the Equestrian rave scene.

If you haven’t had the chance to listen to PonyvilleFM please head over to www.ponyvillefm.com to see what they offer and to see what is on air. They have an amazing staff of DJs and admin which will be visiting us here at Midwest Brony Fest including their station owner who will be making the long journey across the pond from England just for our convention.

The hype machine never stops, the brake lines are cut, and we are in full go mode! Don’t forget to head over to our registration page and pre-register for your badge using promo code “PVFM10” to get your discount and free Aerial Soundwaves figure!

Yesterday, we mapped out where to go if you are attending San Diego Comic Con this year. Today, we’re posting who will be in the artist alley from our favorite comic company, IDW Publishing. The artist alley will be all the way to the left in the convention center as you enter the con floor going towards the television studio booths. Here are the artists and writers who will be in attendance.

That’s all for the artist alley. Come back tomorrow as Thursday’s Convention schedule arrives. 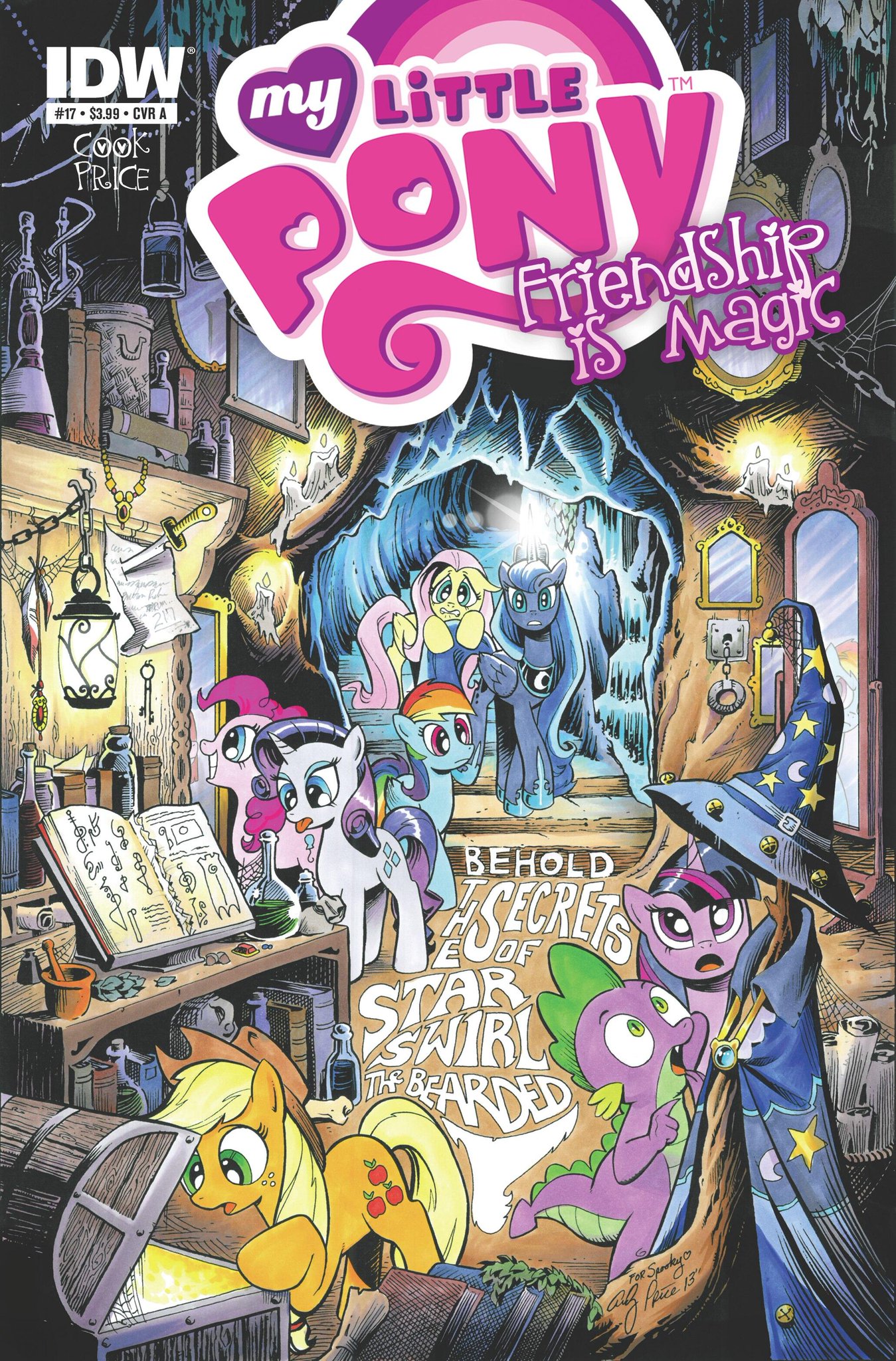 Cover A by Andy Price

Tomorrow is more than likely when we’ll hear about IDW Publishing’s solicitations for March of 2014. However, some breaking news from IDW’s Twitter feed shows Katie Cook and Andy Price are back on the comic writing a story arc around the secrets of Star Swirl the Bearded. No word if this will be a two-part or four part story .So keep checking in for updates on IDW’s solicitations.