“Tina attends a convention based on an animated show about ponies and finds that many of the fans are middle-aged men; when Tina is tricked out of he rare pony toy, Bob goes under cover to get it back.”

If anyone has any questions for @justinhook about tonight’s episode of #BobsBurgers, ask away. He was our primary Bronie consultant on this.

I have a confession… I never understood what the name “Bobcephala” was referencing because I know nothing about horses. #BobsBurgers

Fun fact: This episode is the brainchild of Dan Mintz aka Tina Belcher. #bobsburgers

.@Aoiferocksitout the Lynch-ness was in Dan Mintz’s script from the beginning. He voices Tina and he’s a genius writer as well. #BobsBurgers

Tonight’s Burger: The Life of The Parsley Burger #bobsburgers

END_OF_DOCUMENT_TOKEN_TO_BE_REPLACED

Animatic from Bob’s Burgers – The Equestranauts

Tina teaches Bob about her favorite show, The Equestranauts.
A clip from the animatic of this week’s episode. Sunday, 7PM on FOX.

END_OF_DOCUMENT_TOKEN_TO_BE_REPLACED

FOX has released a preview of the upcoming “brony episode” of Bob’s Burgers.
Expect an episode guide with video on DHN this Sunday after the episode airs.

END_OF_DOCUMENT_TOKEN_TO_BE_REPLACED 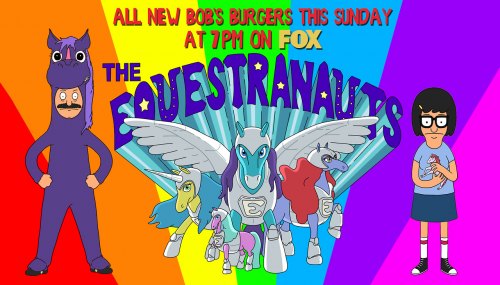 New episode, “THE EQUESTRANAUTS,” this Sunday at 7pm on FOX!
Tina goes to a fan convention and Bob cosplays as a purple horse. It’s as good as it sounds. And it’s the first episode written by Tina herself, Mr. Dan Mintz!

Editor’s note: There will be an episode guide with video for this episode on DHN after it airs.

Scenes from Bob’s Burgers – The Equestranauts This website has some frames from the upcoming “brony episode” of Bob’s Burgers, The Equestranauts. Take a look after the break. The episode airs on FOX’s Animation Domination block this Sunday at 7pm EST.

END_OF_DOCUMENT_TOKEN_TO_BE_REPLACED

According to the following synopses of upcoming new episodes of FOX’s Bob’s Burgers, on Sunday, April 13, the episode entitled “The Equestranauts” will air, which plainly states will be an “homage” to bronies (dubbed as “equesticles”). This conveniently ties into the show as Bob’s daughter, Tina Belcher, is known to be a fan of pony toys and horsie things. Read the synopsis below and the full press release after the break (from Derek Russell’s tumblr).

The Equestranauts – Sunday, April 13 (7:00-7:30 PM ET/PT)
In an homage to the “Bronies” subculture, Tina attends her first Equestra-con, a convention based on her favorite animated pony show, “The Equestranauts.” To her surprise, she finds that the show’s fans are middle-aged men (called “Equesticles.”) When a powerful super-fan tricks Tina out of her rare toy pony it’s up to Bob to go undercover and get it back.