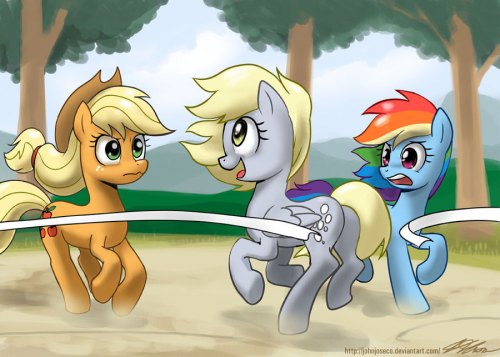 We Were Racing?! by johnjoseco

Another Sunday, and our 30th Sunday Morning Comics. One of these weeks I’m going to go snag all the folders I have with all the comics I”ve collected for these posts and make a mega one. Until then, I will now pimp something non-pony related. When you’re doing reading our comics I encourage you to go check out Gronk: A Monster Story, written and drawn by Katie Cook who is behind the writing of the upcoming MLP:FiM Comics from IDW. Good enough to keep my attention yesterday when I read it from the first strip to the last. Updates are on Friday.

END_OF_DOCUMENT_TOKEN_TO_BE_REPLACED

Love of the Stage
by =metadragonart

Time for your Sunday Morning Comics, but first a word from Andy Price, artist behind the upcoming MLP Comic Book by IDW. I don’t know why stuff like still surprises me, but really? People are sending him OCs with their background history? Anyways, the man answered some questions on that and other things, via Deviant Art.

Wow, you guys are anxious! The questions about the new comic are non-stop! i apologize if I cannot address them all personally, they come so fast!

Here’s a few things to touch on:

Past generation ponies making appearances: that’s really Hasbro’s call, not ours, so you’ll just have to wait and see!
Humans: Nope. Nothing that does a major stray from what is established in the show.
Distribution: Not something we really have a knowledge of- the book will be in general comic shops nationwide, and you can subscribe to the book at the shops. As to what countries it will ship to, I’ve no clue there. Check Diamond Distribution to find out more! There are companies that will ship comics overseas (try Mile High Comics). IDW will also have it available digitally. We hope you will buy the physical comic, it has a bigger impact on comic sales and shows your support to the industry! Besides… Variant covers mean you’ll have fun looking for all the different covers!
Trade edition: while no plans have been put in stone, it’s probable there will be trade editions in the future.

Three  big issues:
1. I’ve had a number of requests to put in people’s original Creation ponies, or to read suggested histories for characters, etc. In short, we cannot do this. The big reasons are legal. But also, if we did this for one, we have to do it for everyone, and there would no longer be room for the Mane 6! (and the little dragon guy… )
2. I’ve also had people asking me how they can get a job on the book. You do realize you are asking me how you can take my job away from me, right? Ain’t happenin’

3. Most important: Yes, I take commissions (When I am able to), but I will not even acknowledge requests or suggestions for “clop-Clop”. Don’t even ask, and that is the end of that subject.

CONVENTIONS!
As announced both Katie Cook and myself will be at Cincinnati Comic Expo in September. This will be the first show we are both attending since the book was announced! Sept. 22-23, Cincinnati Ohio

I will be at Dragon*Con! And, it looks like I may even be doing a Pony panel! No idea what the content of that will be yet, but get down to Georgia and find out! August 1-Sept 3 (labor day weekend) Atlanta Georgia. Tara (Twilight Sparkle) Strong will also be at Dragon*Con!

New York Comic Con: Ditto. DIRELY wish I was doing this show, but expenses are far too high for this one

Remember if you want to see myself or Katie (or better, both!) at a show, please tell us about the show, and even better tell the show about us!!! Asking a show for guests goes a LONG way to getting them there! Megan is back by =Niban-Destikim head the ball by ~Coltsteelstallion A New Shade of Friend by *Toxic-Mario Just Her Problem by *Tprinces awesome pets: If you build it, they will come by *CSImadmax You need help? by ~CIRILIKO Childern of the nIght by *Bonaxor Time for your Sunday comics.

Also if you haven’t heard (and not sure if we posted about it), there is some marathoning going on at The Hub (if you got the channel).

Monday 7/30/12: Starting at 9am EDT and running to 2pm, PONIES, 5 hours worth. And then at some point they’ll also be playing a full hour, weeknights, I do believe in August. We’ll check into that and report back to ya.

END_OF_DOCUMENT_TOKEN_TO_BE_REPLACED

And so the story of the Flank Anomaly continues. If you’ve missed out on the previous strips, here are some links.

END_OF_DOCUMENT_TOKEN_TO_BE_REPLACED 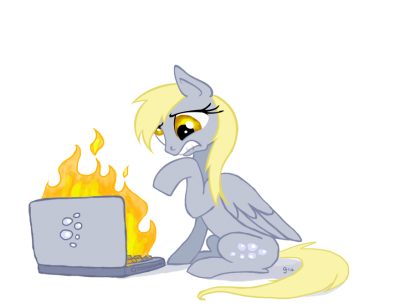 Well a few days ago during SDCC it was announced that a deal was struck between comic book publisher IDW and Hasbro. Seems in the past they had such deals with other Hasbro Property, namely the Transformers and G.I. Joe franchises, so its only natural for them to produce an MLP based comic. The two person team behind the comic is Katie Cook (writer) and Andy Price (artist). Katie can be found on Twitter and over at a typepad site known as KatieCanDaw, and runs a webcomic by the name of Gronk: A Monster’s Story. Andy can be found over on DeviantArt. Yesterday he posted a journal entry thanking everyone who found him via the pony blogs, and tossed a few answers to questions he must have been getting. The entry can be found below (if the image is too small, click on it to go to the DA post). Here’s a quick run down:

And with that, time for your Sunday Morning Comics.

END_OF_DOCUMENT_TOKEN_TO_BE_REPLACED

Well the San Diego Comic Con started today, so expect some random news about MLP coming from it. Anything small we are currently collecting, such as pictures of the MLP Booth and you can expect a write up probably Sunday or Monday. On Friday though there is an official MLP Panel with Hasbro folks that will be taking place, so there may possibly be some news.

Today though right off the bat its been announced that Hasbro & IDW have signed a deal to produce an MLP Comic Book, due out in November. The comic is being produced by Katie Cook and Andy Price. Ms. Cook is best known for her cute style of drawing and is known for the webcomic Gronk. Mr. Price we can’t seem to find too much about, but the article from Comics Alliance does make note that both Cook & Price are fans of MLP:FiM. The article also points out the fact that the show has a major following outside the target audience. Comics Alliance asked editor Bobby Curnow about how IDW was going to approach this version of MLP.

“We’re trying our best to capture the tone of the show, which has plenty of witty jokes that appeal to older fans. It’s silly and irreverent, but at the same time, it’s still very character focused, which is a crucial ingredient for any smart story. Basically we’re just working on making the stories as strong as possible, and everything falls into place from there.

It helps that the writer of the series, Katie Cook, is a big fan of the show, and is a naturally warm, friendly, funny and silly person. I think the scripts come off pretty naturally as a result, while at the same time retaining a real comic book feel. Andy Price, the artist, certainly helps in that department. “

More information I’m sure to come in the future. There is no ‘official’ artwork of the comic as of yet, but you can check out Price’s Deviant Art Page which has character studies and some other MLP related work. As for Ms. Cook you can check out her homepage KatieCanDraw.

In general the comic will probably be slated to the target audience of the show, BUT if they stay true to the show (as mentioned above) then even the older fans should be entertained (and or our nasty habit of rewriting them like we did with the German comic). Its nice to see a comic that won’t just be vectors and backgrounds mashed together.

Original article by Comics Alliance can be read here.