Oh My Disney: Untold – Star vs. The Forces of Evil

Two and a half minute video clip from Oh My Disney: Untold, featuring show creator Daron Nefcy and taking a quick peek at the ins and out of making Star Vs.

The associated article can also be found at Oh My Disney (where you will be greeted by a subscription box half way down).

You might remember the Markey Mailer from the earlier days of the G4 community, and their interview with Peter New and Cathy Weseluck.  They have returned with an interview with MLP story writer Ed Valentine to talk about the episodes he wrote during Season 4.  We’ve snagged a few highlights, as the full article can be read over on the Markey Mailer.

Admittedly I never thought I would ever be interested in any form of ‘My Little Pony’.  Much like writer Ed Valentine, my exposure to the concept of ‘Ponies’ was largely based on the show and toys from the 80’s.  “When I heard the show was relaunching I remember joking with my friend at Nickelodeon when I was there,” he told me.  “I said guess what, they’re relaunching Pony.  Wouldn’t it be funny if I end up on that show?  Because honestly, I would not have thought that I would be writing for a show my little sister had pony dolls of.”

We then talked about the other episode he wrote for that season (‘Flight to the Finish’).  “I’m so proud of that episode,” he said.  “I was so honored to have been entrusted with that.”

The premise of the episode features the school children coming up with different ways to perform a show in the opening ceremonies of ‘The Equestria Games’, the equivalent to the Olympics in the series.  “The idea is that it was the kids, the little ones, gearing up for the Equestria Games,” Ed said, “trying to do something so that they could be part of it but not quite knowing how.”  One of the children named Scootaloo finds herself convinced that if she can’t fly her performance will not be as good as her classmates’.  Try as she might, she just can’t and she becomes frustrated and disappointed. The hiatus can be hard on us all. Without new content to inspire it can be hard for some artists to crank out new content. On the other hand it is a great time for new talent to arise and fill the gap with the seasonal regulars. Recently I had the pleasure to sit down and interview one such rising talent over Skype to get some light insight into why he decided to make music in a genre we don’t see too often in this fandom.

END_OF_DOCUMENT_TOKEN_TO_BE_REPLACED Comic Book Resources has done an interview with comic writer Ted Anderson, where he talks about Equestria Girls, his work on the holiday special coming out next month, and his history with the comics, the show, and himself in general. In addition, the interview also gives a three page preview of the upcoming special. You can find the preview below or by checking out this link where you can find it and the full interview.

END_OF_DOCUMENT_TOKEN_TO_BE_REPLACED 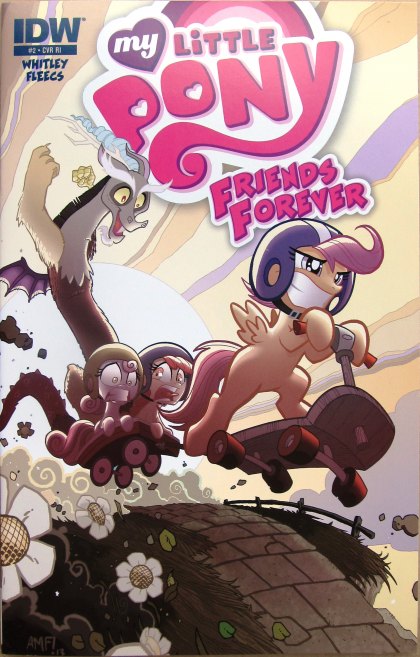 We are so happy to have this week’s guest back on our show. This episode we are joined once again by Jeremy Whitley to talk about his latest issues of the MLP comic and the Kickstarter for his latest comic, Illegal. We then go to our panel with Chef Sandy, Hard Cyder, and Nurse Glitterheart to talk about ponies and such. I know, shocker, right? In case you missed it, Rebecca Sugar took to the internet waves last evening and conducted an AMA on Reddit.  As usual we bring you a text version, but of course click source to head over to the actual thread.  While Ms.Sugar kept the spoilers to herself, there are a few tidbits of unknown details hidden, such as the following:

Q. Hi, Rebecca!  Had a question that’s sorta left ambiguous in the show. How much does the populous know about the gems, or other magical things? I’m sure most everyone knows about the monsters, or at least they saw the giant Red Eye, but do most people know that there’s a bunch of super ladies who live at the end of the beach?  Also, do you think that the gem temple is a big tourist attraction? (Officer_Milky)

A. The Earth in the show is an alternate timeline for Earth, with a history that involves Gems… people have a different relationship to supernatural things, they’re vaguely aware, but they keep their distance…  When our Gems do their job right, people don’t have to know anything is wrong… Our Gems interacting with people is a recent development that has everything to do with Steven.

I know since the series has started I’ve questioned if the show was taking place on an alternative earth, actual earth, or a random earth like planet, namely as people do not react in horror when encountering gem activity nor any government presences.  Enough with the neckbearding though. This evening at 6:30pm ET the show returns to the airwaves with episode 102 – Coach Steven.  While this is a fresh episode for the US side of the border, the episode did air in Canada several weeks ago and made the usual “sharing” rounds on the internet.  Thankfully it seems we will also get new episodes, weekly, for a period of time.  We already have a new synopsis.

SUN Episode 121: Joking Victim – “When Lars convinces Sadie to do all of his work, Steven helps by taking a shift at the Big Donut.”

AMA transcript after the break.

END_OF_DOCUMENT_TOKEN_TO_BE_REPLACED Voice actress, writer, advertiser, radio personality. Snarky blue dinosaur alien. All of these titles can be lauded on today’s interview subject. Derpy News is proud to present a short interview with April Winchell, who voices Sylvia in the Disney cartoon Wander Over Yonder. You can get a closer look into her life after the break! END_OF_DOCUMENT_TOKEN_TO_BE_REPLACED