Well its here if you’ve been waiting for it, delicious HD of the last episode.

Sometime in the near future there will be HD uploads of episode 05, 10 and 11 which are currently missing from the episode list.  I’ve had a few people ask my why, but usually under the idea that I’m the one making them, which is false.  HD episodes are made by community member Mentos, who gets them from a place called TrollHD, which is a usenet group that records HD shows and posts raw recordings.  Mentos encodes them and cleans them up for us, and releases them.

TrollHD did not start recording the HD of MLP:FiM until about episode 13, which is why the earlier episodes are missing.  The episodes that do appear have been shown in reruns, which is when we do get them.  The above episodes I do believe were aired over the easter holiday (would have to recheck my news).  Sooner or later we’ll get them all.

Well, not much to report except what the title says, the auction for Derpy is now over and she landed $2,151 USD for Japan. 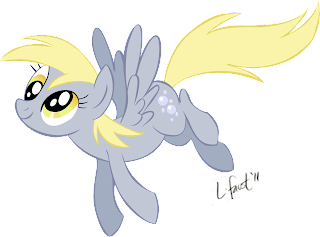 So this week, we’ll be seeing what the pony sketches by Faust will raise for Japan.  I haven’t really checked on them since probably Thursday of last week, but looking around it seems they’ve all plained off a bit.  Pinkie has the lead, which I figured she would being the concept art of her with wings.